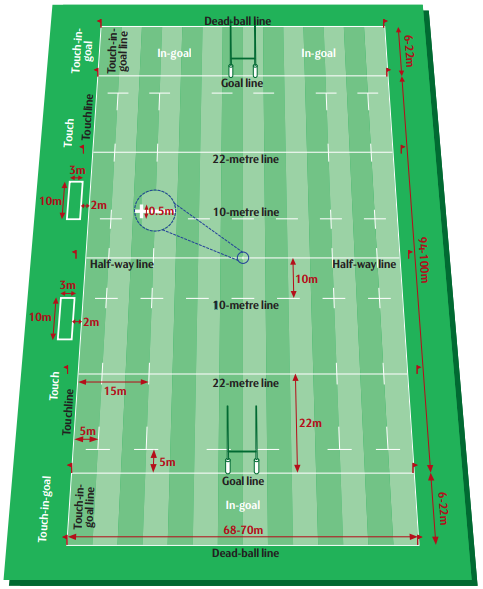 1. The playing surface must be safe.

3. The dimensions of the playing area shown in the ground diagram.

a. The playing area is rectangular in shape.
b. Any variations to these dimensions must be approved by the relevant union for domestic competitions or World Rugby for international matches 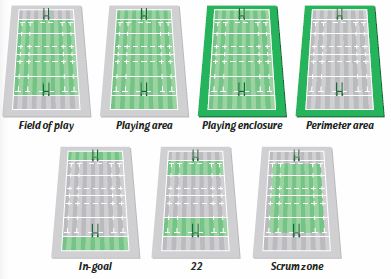 4. There are solid lines configured as shown in the ground diagram. The solid lines are on:
a. The dead-ball lines and touch-in-goal lines.
b. The goal lines.
c. The 22-metre lines.
d. The half-way line.
e. The touchlines.

6. There is one line 0.5 metres long that intersects the centre of the half-way line.

7. When padding is attached to the goal posts the distance from the goal line to the external edge of the padding must not exceed 0.3 metres.

8. There are 14 flag posts with flags, each with a minimum height of 1.2 metres.

10. One flag post is positioned in line with the 22-metre line and the half-way line on each side of the pitch, two metres outside the touchlines and within the playing enclosure (six flag posts in total).

Objections to the ground

11. Teams must inform the referee of any objections before the match starts.

12. The referee will attempt to resolve the issues and will not start a match if any part of the ground is considered to be unsafe.