1. Methods and points value of scoring :

2. A try is scored when an attacking player: 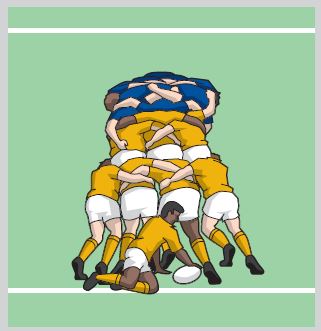 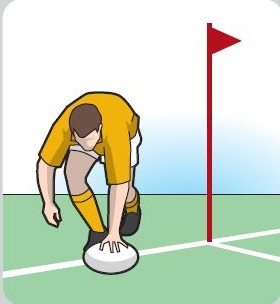 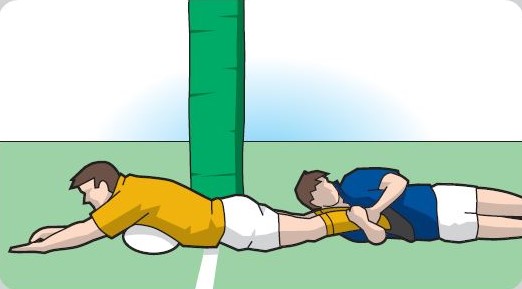 3. A penalty try is awarded between the goal posts if foul play by the opposing team prevents a probable try from being scored, or scored in a more advantageous position. A player guilty of this must be cautioned and temporarily suspended or sent off. No conversion is attempted.

4. For any goal to be successful, the ball must be kicked over the crossbar and between the goal posts without first touching a team-mate or the ground.

5. If the ball goes over the crossbar and over the height of the goal posts, the kick is successful if it is deemed that the ball would have gone between the goal posts had they been taller.

6. If the ball has crossed the crossbar and the wind blows it back into the field of play, the score stands.

7. When a try is scored, it gives that team the right to attempt a conversion, which may be a place-kick or drop-kick.

9. The kicker’s team, apart from a team-mate holding the ball, stay behind the ball when it is kicked and do nothing to mislead their opponents into charging too soon.
Sanction : Kick is disallowed.

10. If the ball falls over before the kicker begins the approach to kick, the referee permits the kicker to replace it. While the ball is replaced, the opponents remain behind their goal line.

11. If the ball falls over after the kicker begins the approach to kick, the kicker may then kick or attempt a dropped goal.

12. If the ball falls over and rolls away from the line through the place where the try was awarded and the kicker then kicks the ball over the crossbar, the conversion is successful.

13. If the ball falls over and rolls into touch after the kicker begins the approach to kick, the kick is disallowed.

The opposing team at a conversion

14. All opposing players retire to their goal line and do not overstep that line until the kicker begins the approach to kick. When the kicker does this, they may charge or jump to prevent a goal but must not be physically supported by other players in these actions.

16. If the ball falls over after the kicker begins the approach to kick, the opponents may continue to charge.

17. If the opposition touches the ball and the kick is successful, the goal stands.

18. A penalty goal can be scored only from a penalty.

19. The kicking team must indicate their intention to kick for goal without delay.

21. The kick must be taken within 60 seconds (playing time) from the time the team indicated their intention to do so, even if the ball rolls over and has to be placed again.
Sanction : Kick is disallowed and a scrum is awarded.

22. If the kicker indicates to the referee the intent to kick at goal, the opposing team must stand still with their hands by their sides from the time the kicker starts to approach to kick until the ball is kicked.

23. If the kicker has not indicated an intention to kick at goal but takes a drop-kick and scores a goal, the goal stands.

24. The kicker places the ball directly on the ground or on sand, sawdust, or a kicking tee. The kicker may be assisted by a placer. Nothing else may be used to assist the kicker.
Sanction : Scrum.

25. Any player who intentionally touches the ball in an attempt to prevent a penalty goal being scored is illegally touching the ball.

26. A defending player must not shout during a penalty kick at goal.

27. If the opposing team infringes while the kick is being taken but the kick at goal is successful, the goal stands and a further penalty is not awarded. If the kick is unsuccessful, the non-offending team is awarded a penalty 10 metres in front of the original mark.
Sanction : Penalty.

28. A player scores a dropped goal by kicking a goal from a drop-kick in open play.

29. The team awarded a free-kick (including where they opt for a scrum or lineout instead) cannot score a dropped goal until the ball next becomes dead or until an opponent has played the ball, has touched it or has tackled the ball-carrier. Any such kick is deemed to be unsuccessful and play continues.